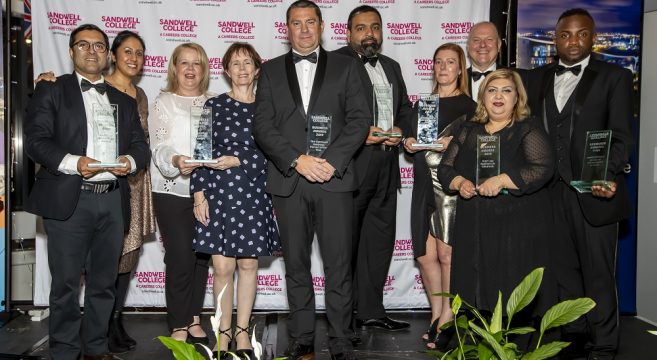 Winners on the night were…

Sandwell College Principal and Chief Executive, Graham Pennington, said: “It’s fantastic to see so many people celebrating success. I want to thank all our employers and the council for the experience and support you have given to our students over the years, helping to improve the life chances and the economic prosperity of our learners, community and businesses.”

The Sandwell Business Awards, now in its fourth year with more nominations than ever before, celebrates the successes of Sandwell businesses and the people that make the borough a great place to live, work, train and learn.

The awards were made possible through the collaborative partnership of Sandwell College, Sandwell Council, Sandwell Business Solutions Centre and The Black Country Chamber of Commerce.

Special thanks go to the event’s main sponsor Liberty Engineering, the category sponsors Black Country Chamber of Commerce and Apprenticeships Ambassador Network, and MiGlass, who manufactured the glass awards at their factory in Smethwick.