Home / SONGS FROM OVER THE RAINBOW

SONGS FROM OVER THE RAINBOW 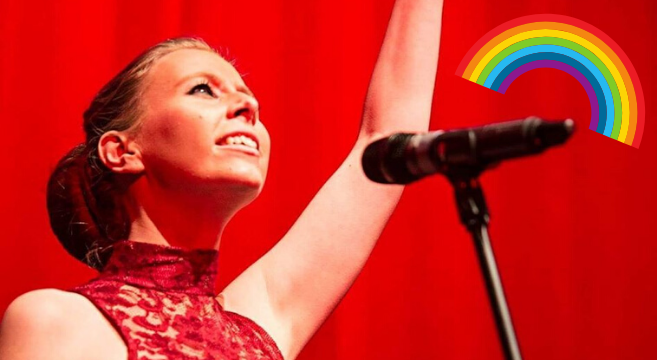 Kind-hearted Sandwell College Performing Arts tutor Kirsty Leslie is live-streaming street concerts for her neighbours as a warm-up to the NHS #ClapForCarers on her Facebook music page.

Kirsty played keyboards and sang a set of requests in a street near her home for neighbours sitting outside. And at 8pm she sang Over The Rainbow as the community applauded the NHS. Kirsty plans to perform her concert every Thursday in different streets around the region and raise money for Bowel Cancer UK.

Kirsty, who has previously worked on cruise ships as a piano vocalist, was actually taught by Sandwell College’s Head of Creative Industries Michelle King when they were both at Stratford-upon-Avon College. After completing her BTEC in Performing Arts, she went on to do a Music degree at Coventry University and then worked as a professional singer and musician.

Kirsty has also just completed an MA in Music Therapy, and now teaches music and musical theatre programmes at Sandwell.

Kirsty says: “Last night was not about me, it was about our amazing NHS and key workers who are keeping this country going! It’s also about us coming together in our hour of need. The community feel from that street was absolutely incredible, and people who have lived there for over 30 years said that they have ‘never felt this much sense of community in all their time here’.”

Kirsty’s colleagues Lauren and David Ross have also been making music. Lauren has written a song called Lay it All Out which David has recorded and it’s now on the DenovoRecordz Instagram page and on SoundCloud.

Students enrolled on a Music course are signed to the College’s record label Denovo Recordz and their work is showcased on SoundCloud.

Home / SONGS FROM OVER THE RAINBOW
We use cookies on our website to give you the most relevant experience by remembering your preferences and repeat visits. By clicking “Accept All”, you consent to the use of ALL the cookies. However, you may visit "Cookie Settings" to provide a controlled consent.
Cookie SettingsAccept All
Manage consent