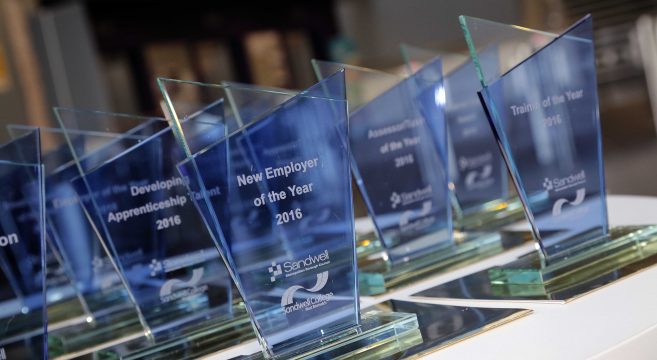 Adrian Bailey, MP for West Bromwich West, was a special guest at the ceremony organised by Sandwell College, Sandwell Council and the Think Sandwell team, and the son of the late Sandwell Council leader, Cllr Darren Cooper, Matt also presented an award in his father’s honour.

Trainee of the Year went to Sandwell College’s Aaron Bell. Apprenticeship Star Awards went to Anthony Goodall (pictured above) from the AA, and Kirsty Campbell from Sandwell Council’s Bereavement Services.

The Darren Cooper Award was presented to Leah Truslove from Brandhall Primary School.

Sandwell College Principal Graham Pennington said: “It’s fantastic to see so many people celebrating. I want to thank all our employers and the council for the experience and support you have given to our students over the years.”

Home / SANDWELL BUSINESS AWARDS CELEBRATION
We use cookies on our website to give you the most relevant experience by remembering your preferences and repeat visits. By clicking “Accept All”, you consent to the use of ALL the cookies. However, you may visit "Cookie Settings" to provide a controlled consent.
Cookie SettingsAccept All
Manage consent