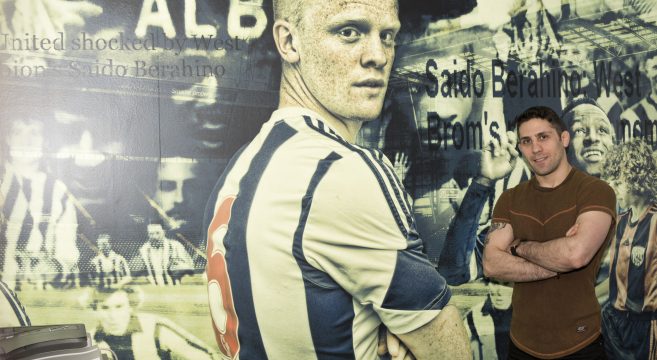 The next generation of Premiership footballers are being inspired by the photography and artwork of talented Sandwell College students. Higher National Diploma student Marouf Konjin, who is now studying for a photography degree at the University of Wolverhampton, has seen his striking images grace the walls of the new WBA Academy.

One of Marouf’s murals shows first team player Liam O’Neil, currently out on loan at Scunthorpe United, and Donervon Daniels – now out on loan to the Scottish Premier League – who also broke through from the academy.
Both portraits were shot in the college’s state-of-the-art studio at Central Campus, along with one of the photography student’s fireball creations, which was developed from a studio portrait.

His second mural features a set of next generation academy players taken at The Hawthorns ground.
Marouf said: “I feel really proud to see my work on show like this. When I was working on the images I never expected the end result to have such an impact.”

Photography team leader David Waldron added: “We offer lots of opportunities for our students to get real world experience by working on live projects. Some, like our collaboration with West Bromwich Albion academy, develop into something extra special and ultimately rewarding for all concerned.”

Students started the prestigious project with a brief to produce photographic portraits of up and coming academy footballers, to be displayed alongside images of established players, and supported with inspiring quotes.
Main murals were also created by Neil Kingsbury and Jonathan Kibbler, with further images from Lisa Robinson, Tina Wood, Sophie Jones, Amanda Fry and Viktoria Kohadova.

Albion’s academy operations manager, Matt Layton, said: “The work that the photography and art students developed far exceeded our expectations. They produced unique designs which have clearly depicted our academy culture and philosophy. We look forward to working with the college again in the future.”