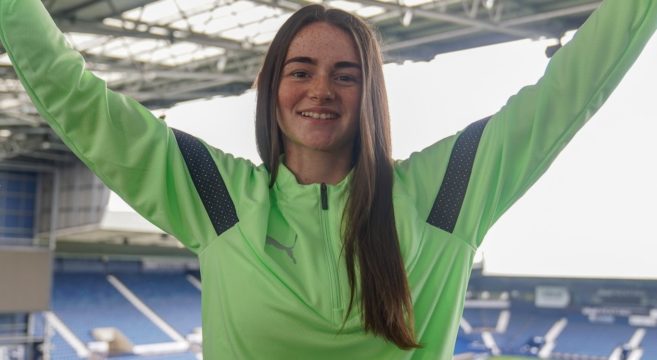 The young goalkeeper, from Wolverhampton Wanderers’ development team, was part of Albion Women’s Football Education & Coaching Programme in partnership with Sandwell College for two years, and will be going to Hartpury University later this year.

“She is brave and a very good shot-stopper, we are confident that being in a first team environment will push her onto the next level.”

Mackenzie added: “I’m really excited to get going! I know the girls really well from the college programme, and I know the ground well too.

“It’s a club going in the right direction, and as a young player, it’s really comforting to know I’ll be growing with the team.”

Mackenzie joins central midfielder Abi Loydon, attacker Mariam Mahmood and defender Isabel Green who have also been promoted to the Albion Women senior team as a result of their success on the Sandwell College programme.

Home / MACKENZIE JOINS ALBION WOMEN
We use cookies on our website to give you the most relevant experience by remembering your preferences and repeat visits. By clicking “Accept All”, you consent to the use of ALL the cookies. However, you may visit "Cookie Settings" to provide a controlled consent.
Cookie SettingsAccept All
Manage consent