Home / LAUREN IS OVERJOYED TO GET ‘DREAM’ CAMBRIDGE UNIVERSITY OFFER

LAUREN IS OVERJOYED TO GET ‘DREAM’ CAMBRIDGE UNIVERSITY OFFER 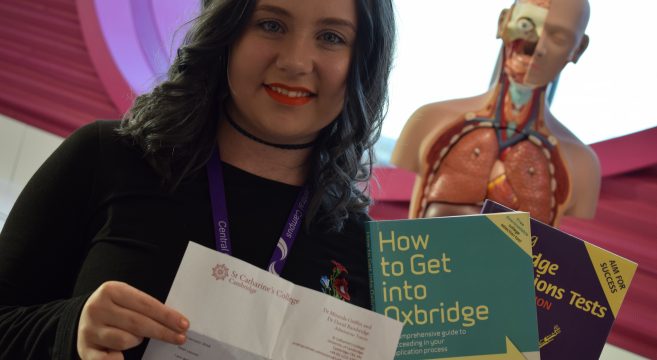 A talented Sandwell College student is overjoyed at being offered a place at Cambridge University.

Lauren Brant, aged 17, is hoping to study Psychological and Behavioural Sciences at St Catharine’s College, subject to gaining A*AA in her Biology, Psychology and Sociology A Levels at Central Sixth.

After a nail-biting wait to check her emails, while she sat three mock exams in a row, Lauren finally got the fantastic news she had been longing for.

She said: “It still hasn’t sunk in. My initial reaction was to tell anyone who would listen.

“I was in a state of disbelief when I saw the email. It’s something that doesn’t seem to happen where I come from. I’m the first on my mom’s side to go to university at all, and the first to move away, so it’s a pretty big deal.

“I feel like I’ve got this extra motivation to work now, and not getting the grades isn’t an option – even if I have to lock myself in my bedroom.”

Lauren has been preparing for Oxbridge from the time she was at Brownhills School. She has been on outreach trips to meet former Cambridge students and admissions tutors, and has also been strongly supported by her tutors at Central Sixth with mock interviews and application resources before going through the lengthy and rigorous selection process.

“Cambridge has always been a dream of mine. It’s surreal to actually get there and think it’s not out of your reach,” she said.

Lauren has worked part-time in a retail store and as a mental health mentor for a charity, and she hopes to continue her studies with a doctorate after her degree.

Central Sixth Director, Dr Matt Lamb, added: “This is wonderful news as Lauren is such a bright, able and pleasant student.

“We wish Lauren every success as she enters the final months of her A Level studies.”