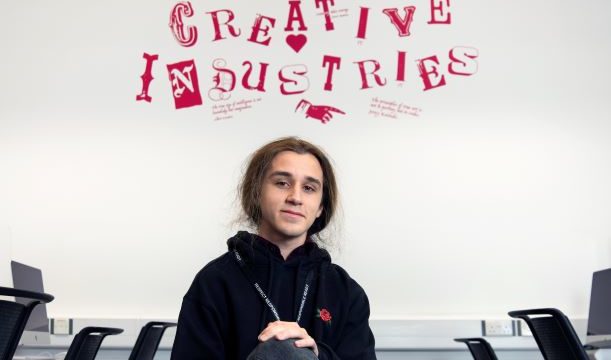 Interactive Media student Sedat Savas has been commissioned by Multistory to produce animation for the ‘Seeing in Isolation’ project.

Multistory invited Sedat to collaborate on Craig’s digital story where he describes Charles Bonnet Syndrome which causes a person whose vision has started to deteriorate to see things that aren’t real (hallucinations).

The feedback from Sedat’s animation is overwhelmingly positive!

Becky Sexton, Project Manager at Multistory says: “Sedat was brilliant to work with, from beginning to end. He listened to the brief and background to the project and then transferred this to animation brilliantly. We were really impressed by his ideas and also how he carefully absorbed our feedback after showing us his first draft. We hope to work with Sedat again in the future.”

Karren Visser, the project photographer says: “At the beginning of adapting the Seeing in Isolation project for a virtual format, I really wished to include animation as I too have Charles Bonnet Syndrome and my hallucinations often feel surreal. Sedat was so engaging and he quickly understood how disorientating it can be to suddenly see things that are not there. His animation of Craig’s Charles Bonnet Syndrome is specific to Craig but also has so many universal elements that are highly informative.”

Craig, whose digital story it is, says: “It’s great to have an extra feature there to interpret what I was saying and paint a picture for sighted viewers. For those who can’t see, the sound accompanying the animation adds an extra level and helps them to understand that what I’m seeing may be moving.”

Tracey, Craig’s mum says: “The way that Sedat put Craig’s words into pictures is very clever. It gives other people an insight into what Craig sees, and used to see. It’s just amazing. The whole family think it’s great.”

Home / INTERACTIVE MEDIA STUDENT COMMISSIONED TO PRODUCE ANIMATION FOR MULTISTORY
We use cookies on our website to give you the most relevant experience by remembering your preferences and repeat visits. By clicking “Accept All”, you consent to the use of ALL the cookies. However, you may visit "Cookie Settings" to provide a controlled consent.
Cookie SettingsAccept All
Manage consent