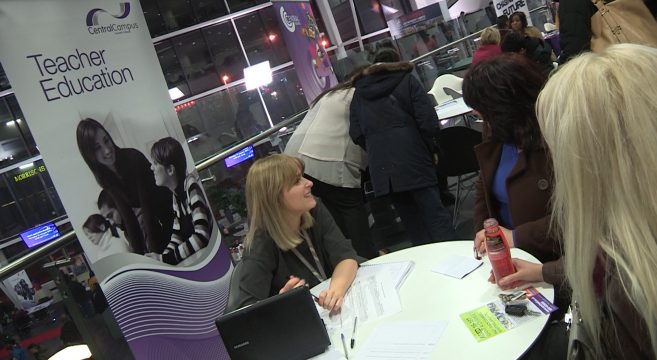 Hundreds of open night visitors to Sandwell College got the chance to rock out with exotic animals or make their own music. Scott Adams brought his Exotic Zoo to Central Campus, featuring baby crocodiles and chameleons, meerkats, snakes, tarantulas, lizards and giant millipedes so interested applicants could get up close to the minibeasts on the college’s animal care and management courses.

Rock School, run by Sandwell Music and Arts Service, is a group of young people from around Sandwell who regularly meet up to write and play original music. The group, who have recorded several albums, including the recent Not Messin’ Around, on CD and vinyl, will be performing at future open nights.

Construction teams shared trade tips on cutting and fitting skirting board, paint techniques, and secrets of skilful plastering, tiling and plumbing ahead of a new ‘Learn How To…’ DIY course starting next month.
And the list of activities for visitors to try out ranged from state-of-the-art 3D printing, cabin crew training, art workshops, nail art and hair-up dos, logo design, map reading, puppet making and interactive gaming.

Automotive teams showed off their custom-built grassracer with photography students on standby to take pictures of wannabe pilots, while fashion students modelled this season’s designs on the catwalk.

Sandwell College’s next open day is on Wednesday 11 February, 5 to 8pm, at Central Campus and Central Sixth.