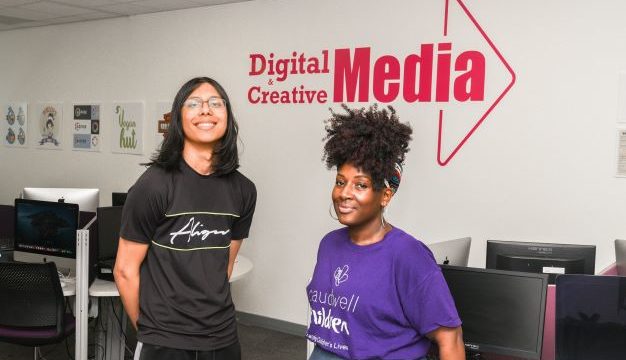 Digital & Creative Media students from Sandwell College will have the honour of seeing their design and animation work featured in a Birmingham 2022 Commonwealth Games project.

Second year student Dan Bains has designed the winning logo for the launch of All Roads Lead to Alexander, Caudwell Children’s legacy project which will produce a series of performances from local community groups across four venues, culminating in an eye-catching screening in Victoria Square on July 31. Project work by the whole year group will also be showcased at a community event to be held at Windmill Community Centre in Smethwick on the eve of the city square screening.

The Year 2 group created the project’s promotional material in teams as part of their work experience programme. The learners have been collaborating closely with Caudwell Children – a charity transforming the lives of disabled children and founded by one of Britain’s most influential entrepreneurs and philanthropists, former chief executive of high street retailer Phones 4u John Caudwell. All students will be credited for their design work, including their animation of the charity’s butterfly logo in the launch film.

Charlene Carter-James, Project & Community Engagement Coordinator of All Roads Lead to Alexander, said: “We wanted to engage the Sandwell community so we approached the College and we worked really well together. The students have shown great skill in creating quality assets for the All Roads Lead to Alexander project. Our marketing team were surprised they were only students. The designs were all so good it was difficult for us to decide on the winning logo but long-term we felt Dan’s had longevity. They’ve done brilliantly and the staff have been super supportive. We hope to maintain the partnership going forward.”

Music and Photography students have also been involved and have produced high quality work for the project. Students have been required to research multiple topics including branding guidelines for community partners K’antu Ensemble, SAFS Care Support, Allies Network, Association of Jamaica Nationals and the Commonwealth Games.

Richard Franklin, Lecturer in Photography & Digital Imaging at Sandwell College, said: “Our learners have fully engaged in this project and produced professional-quality designs that have impressed the Marketing & Communications team within Caudwell Children. Working with Charlene has been immensely rewarding for both the staff and students. She visited the groups on a regular basis to deliver the working briefs and provide constructive feedback. This has helped our learners to develop a variety of professional-practice skills that will benefit them in their future careers.”

He added that logo design winner Dan had consistently worked logically throughout the project.
“He clearly understands the importance of effective research, planning and experimentation as he produced a variety of different designs that eventually lead to the production of the winning logo.”

Home / DESIGN STUDENTS’ WORK TO BE FEATURED AT COMMONWEALTH GAMES PROJECT LAUNCH
We use cookies on our website to give you the most relevant experience by remembering your preferences and repeat visits. By clicking “Accept All”, you consent to the use of ALL the cookies. However, you may visit "Cookie Settings" to provide a controlled consent.
Cookie SettingsAccept All
Manage consent