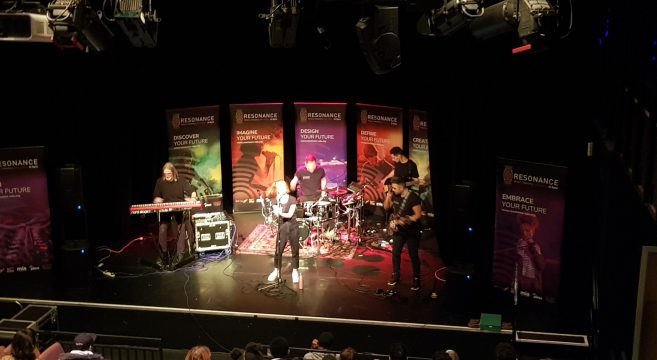 Professional musicians who have toured the world with legendary acts Robert Plant and Steve Winwood showcased industry careers to Music students with their Resonance Roadshow.
The roadshow is promoting the brand-new state-of-the-art Resonance music institute to prospective students.

Organisers of the roadshow are using the tour to highlight the myriad of careers available in the music industry – many of which are covered by the degree courses on offer at Resonance. Co-director Rick Benton, who currently plays keyboard with West Midlands icons Magnum, assembled a band of talented musicians to help demonstrate how Resonance could kick-start a career in the music industry.

Singer with the roadshow band is children’s TV presenter and face of the Disney Channel Samantha Dorrance. She was joined by guitarist Greg Platt Lake, a session musician who has been working professionally since leaving school at the age of 16, and has worked all over the world with acts such as Steve Winwood and Robert Plant. Session drummers Lloyd Draker and Richard Kirk, who has played with the likes of Scorpions guitarist Uli Jon Roth, Limehouse Lizzy and the Grey Goose Blues Band, plus bassist Dan Clark who has played alongside Steve Vai, Scott Matthews and Beverley Knight, completed the line-up.

Michelle King, Head of Creative Industries at Sandwell College, said: “Our growing music department at Sandwell College is thrilled to have hosted the Resonance Roadshow, which provided our students with the opportunity to meet and learn from professional musicians and broaden their aspirations of pursuing a career in the music industry. As the Leadership College for Creative and Cultural Skills in the Midlands we are excited by the possibilities that a new specialist music institution will provide for emerging artists in the local area.”

As well as performing songs and engaging students in music techniques, the sessions also aimed to provide a wider picture about careers in music.