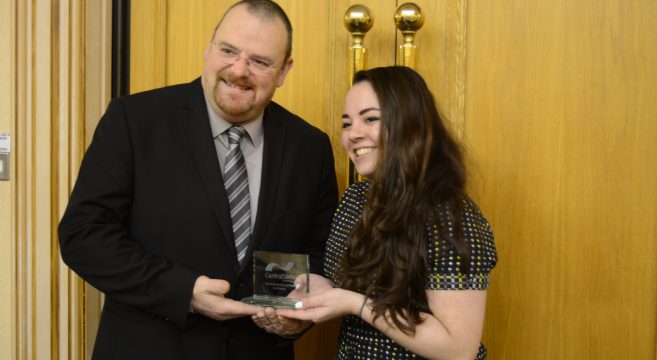 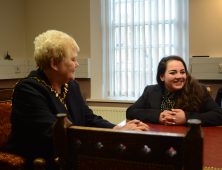 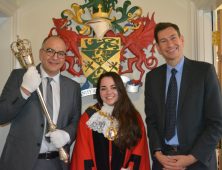 A Sandwell College sixth former’s political star is on the rise after getting the vote for best in her year.

Central Sixth student Alice Ramdehal was nominated by her A Level tutors and presented with the Emily Pankhurst Award for Politics by Sandwell Council Leader Councillor Darren Cooper. Alice, aged 17, is studying A Levels in Politics, Law and History, and gained grades AAB in her AS Level exams last summer.

She was presented with her award by the leader at his cabinet pre-meeting, and had the opportunity to meet and speak to cabinet members. Alice then met The Mayor of Sandwell, Councillor Barbara Price, and toured the historic Big House next door.

As part of her award, Alice, who already has an unconditional offer from the University of Birmingham and an offer from Bristol University to study Politics and International Relations, will be shadowing the leader for a day.

Alice, whose twin sister Amy also attends Central Sixth, said: “My big ambition is to get my Master’s degree and become a diplomat. I love studying at Central Sixth and I’ve really come out of my shell, so thank you to everyone at the college for helping me get where I want to be, and thank you for giving me this award and recognising that young people are climbing the ladder.”

Councillor Cooper said the award in tribute to the leading British suffragette, who played a militant role in helping to gain women the right to vote, was very fitting. He said: “It’s very satisfying to see someone like Alice who has really taken an interest in politics, and there’s a real opportunity for her to aspire even further. Well done to the college principal Graham Pennington and the Central Sixth team for getting young people to raise their aspirations.”