Home / AINSLEY IN RUNNING TO BE DUNLOP’S NATIONAL MULTISKILL CHAMPION

AINSLEY IN RUNNING TO BE DUNLOP’S NATIONAL MULTISKILL CHAMPION 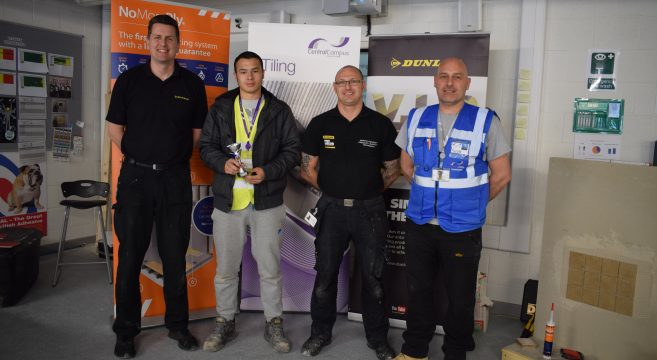 A Sandwell College Construction student is in the running to be Dunlop’s national multiskill champion.

Ainsley Walwyn is through to the grand final to be held in Stoke after being presented with his trophy by Dunlop Adhesives.

The Dunlop Multi-Skill Champion Competition is the only one of its kind in the UK to recognise students across the UK taking the City & Guilds Construction Skills qualification.

The competition culminates in the grand final in June with students being tested on their tiling and decorating skills. As an added element this year, finalists will also be tested on their carpentry and joinery skills – a core element of the qualification.

Judges at the Grand Final this year include Nicola Butcher, aka “The Female Chippy”, a multi-award winning carpenter, Wayne de Wet, professional decorator, renowned industry expert and former Dulux Select Decorator of the Year Grand Winner and Dave Rowley, lead judge for the national SkillBuild finals for wall and floor tiling and Training Manager at Dunlop.