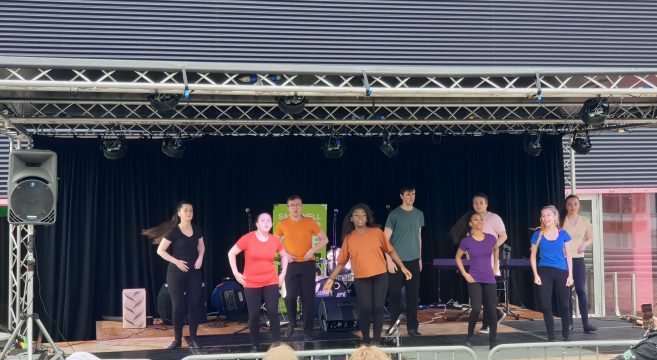 Sandwell College launched its inaugural Festival of Creative Arts with a live music and dance extravaganza at the centre of West Bromwich.

Musical Theatre and Performing Arts students braved the rain to make their debut on the New Square outdoor stage, while Music students played live in the Arts Café at Central Sixth campus.

West Bromwich Town BID team chairman Lisa Hill said: “Thank you to everyone that attended the Sandwell Rocks event in New Square. A big thank you to the students at Sandwell College for the fantastic performances and hard work. This event could not have happened without you all. The weather wasn’t the best but you did it.”

Sandwell College’s Head of Creative of Industries, Michelle King, said: “Sandwell College is proud of its commitment to developing the artistic talents of young people in Sandwell and beyond. For many years the Performing Arts and Visual Arts departments have showcased the outstanding work of its students in an array of live performances and exhibitions. This year, we have combined forces to present a month of events, in which we present student work from across all creative subjects and levels.”