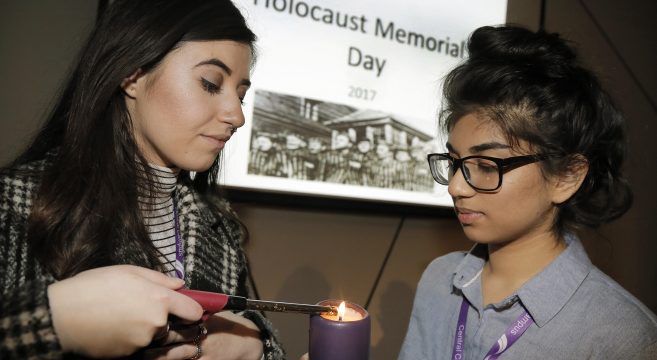 History students from Sandwell College’s Central Sixth campus led a moving memorial event to mark the Holocaust. A candle was lit by A Level student Shazeda Ahmed at the ceremony held in commemoration of the liberation of Auschwitz.

Members of Sandwell Council, Sandwell Unison branch and other trade unions, joined the students to pay their respects.

Head of Lower Sixth, Dr David Craik gave the welcoming address and closing salutation to honour the victims. He said: “Normally we gather together in this theatre to celebrate awards and prizegivings, but today history demands we gather to remember a very wide range of people. Sandwell College itself is a reminder that the holocaust was a great failure as here we have students from 91 different nationalities and ethnicities.”

Students Amtul Khawja and Holly Kay read reflections by holocaust survivor Pastor Martin Niemoller and an extract from Robert Burns’ poem Man Was Made to Mourn. Attendees then created a memorial wall with names of holocaust victims who were themselves university or college students at the time.

Councillor Simon Hackett, Sandwell Council’s Cabinet Member for Children’s Services, added: “It’s great to see young people so involved in this event and to work in partnership with the college. We look forward to building on this ceremony next year.”